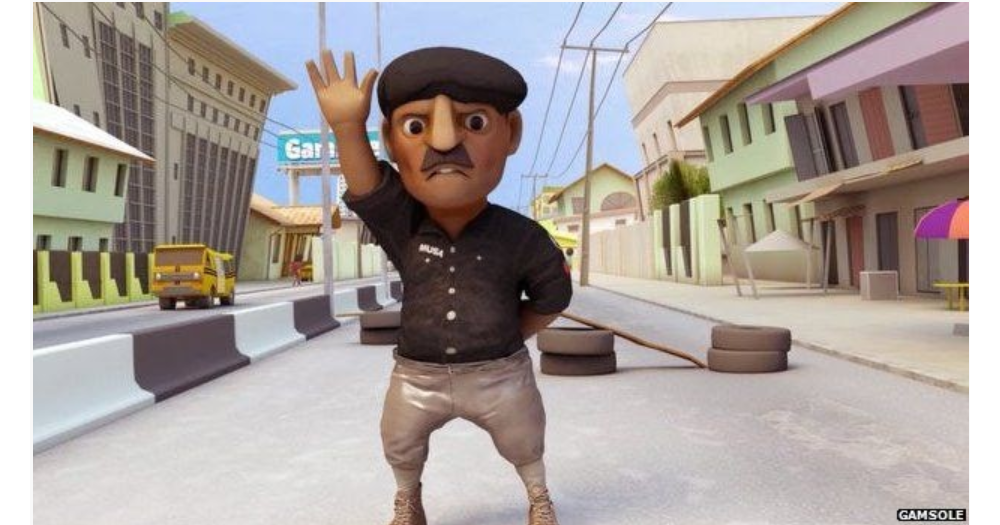 Abiola Olaniran, founder and chief executive of Gamsole, agrees that mobile is the present and future of the African gaming market. Gamsole specialises in creating games for the Windows Phone platform, and has seen its games downloaded over 10 million times in the last 18 months. The company is now looking to expand its products to other mobile systems, including feature phones - as basic, low-cost phones are called.

Gamsole likes to make games with AFrican characters and plots. "Gaming is still a nascent industry in Africa," says Mr Abiola. "Due to the high rate of mobile device penetration, mobile can serve as a converging point for both casual and hardcore gamers. Gamsole creates games with an African flavour - based in African cities, telling African stories, with local characters. "African-themed games can be the future of gaming if people can relate with the content on a personal basis, based on their daily life experiences," he says. "This is one way to push adoption of games in Africa." But he also believes African-themed games can become popular across the world.

"At Gamsole, our idea of African games is not games by Africans for Africans. No, it's games by Africans for the globe." University student Feyi Aderibigbe says she enjoys Gamsole's African-themed games as they relate to her everyday life and are "a good way to kill boredom". "Personally I believe African-themed games relate better with our everyday life experiences," she says. "Africa is shifting to a position where we don't only want to learn other people's story, we also want to share our stories, cultures, experiences, and lifestyle with the whole world, and I think that African-themed games are a good medium to achieve this," she says. The illustrations below show two of our games, created with African content for gamers all over the world.

Sweet Paradise is a match-three game where the player is presented with an adventure of a smart, cute monkey on a quest. This takes him through China, Egypt, and Paris to Obudu cattle ranch in Nigeria. The Player progresses through a series of numbered levels presented in all the five attractive locations of the game.

The Player tries to match similar colourful fruits in sets of three, in a limited number of moves, by swiping left, right, up, or down. Objectives get tougher to beat as the player progresses, forming an increasingly tough barrier which is supposed to make the player purchase in-app upgrades.

Our aim was to create a game with a striking visual appeal to a global audience. The team worked tirelessly, brainstorming on different ideas, character designs/sketches, potential logo and design directions, before careful selection of the final approved choices. 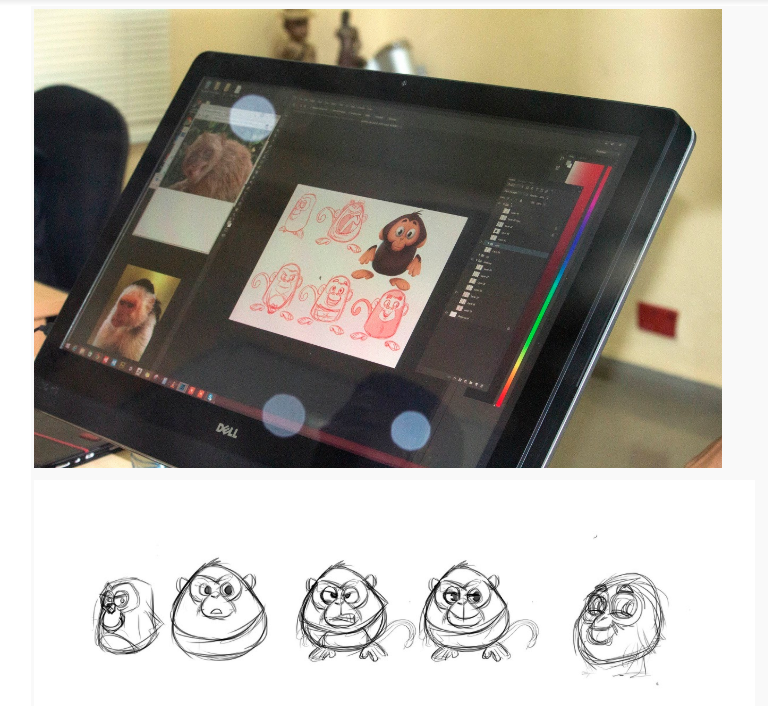 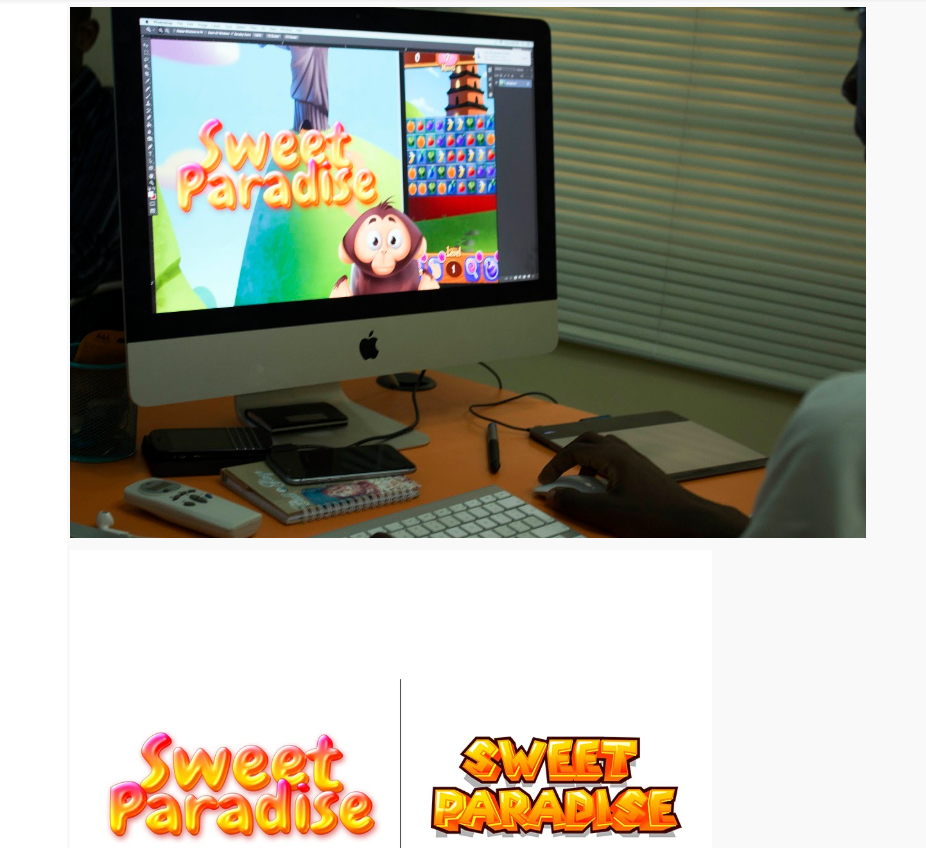 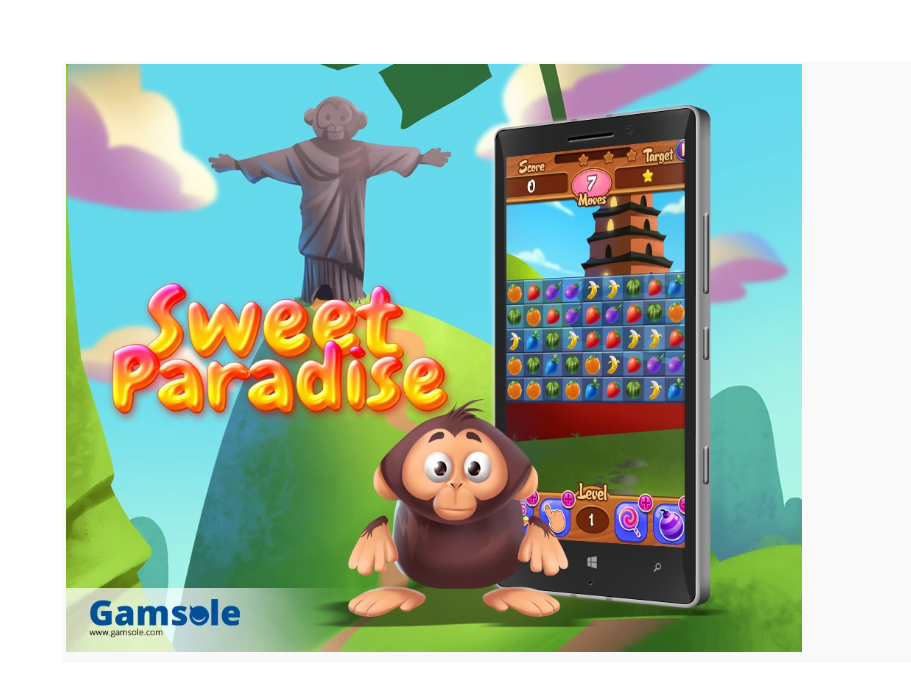 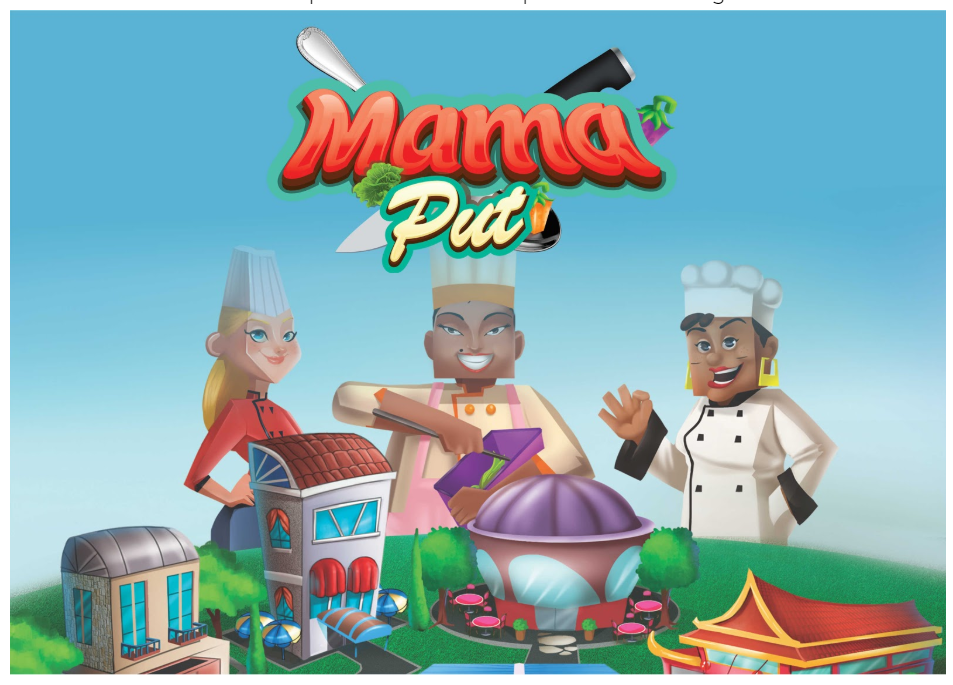 Mama put is a fast pace fruits cut game. The goal is to slice fruits that burst into juicy fruits. It is level based and users have specified tasks to complete before moving on to the next level. The Characters portray different chef personalities around the world. They each appear in the game at different stages as the player progresses. 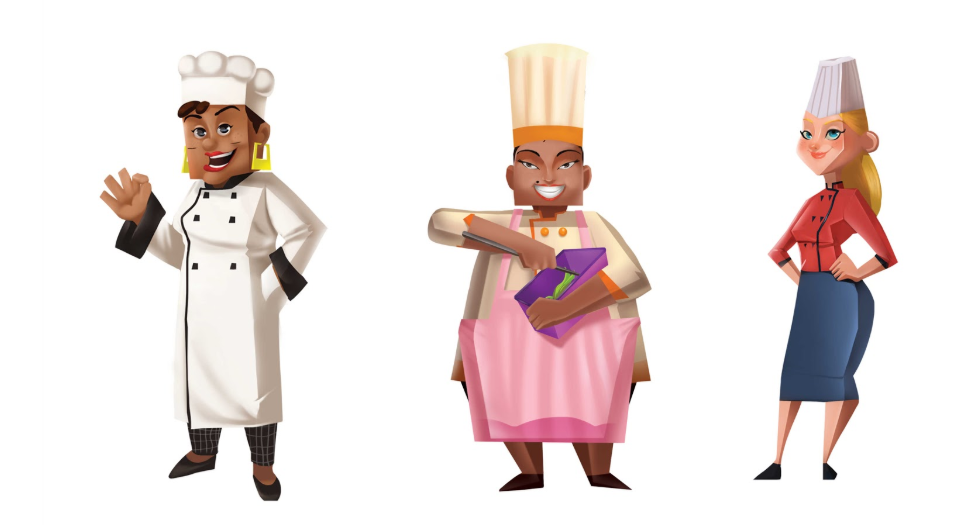 FRUITS The creation of the Fruits and the arts in general were influence by geometrical shape, with very interesting and attractive colours. 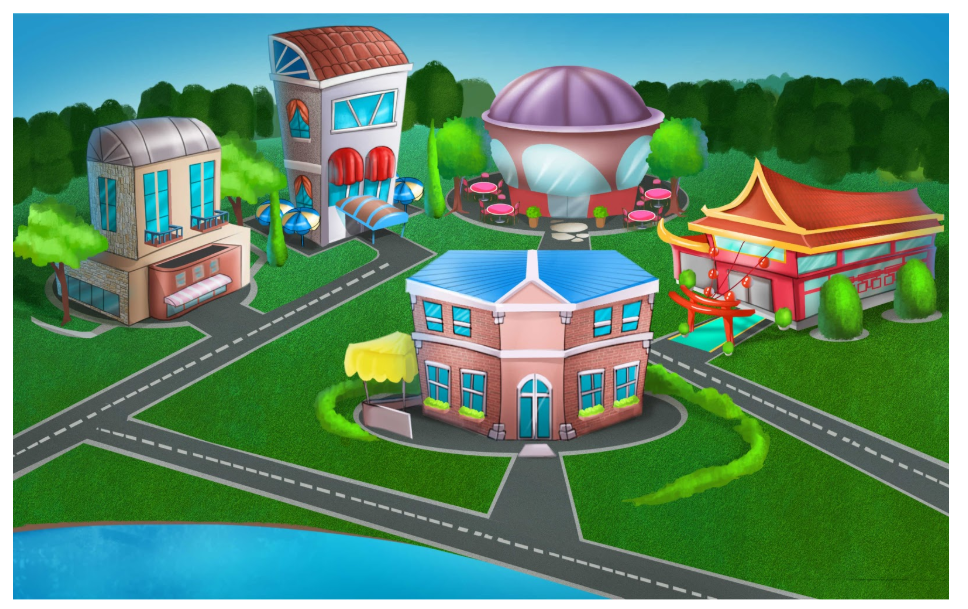 The overall look of the map IN GAME BACKGROUND 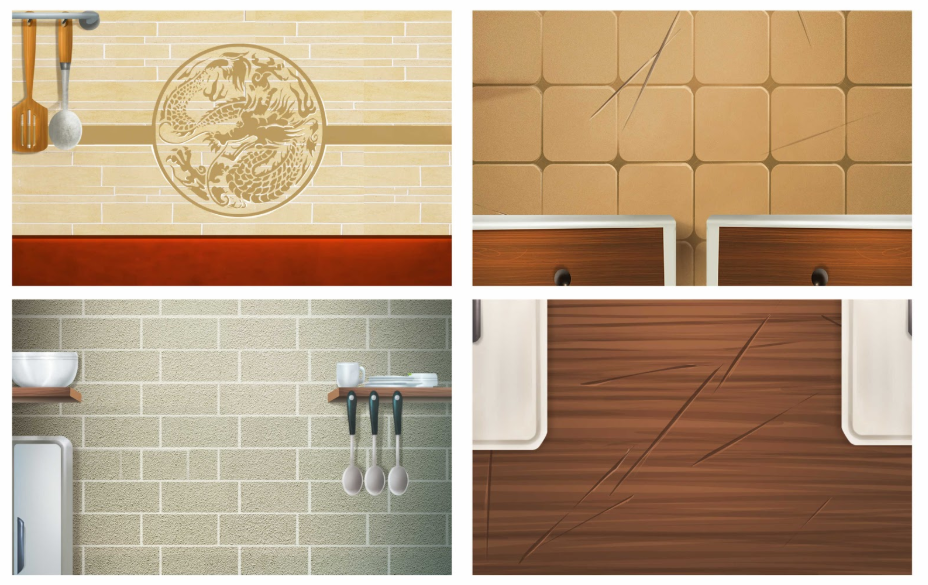 GAME TUTORIAL SYSTEM The tutorial in the game will always appear the first time the player starts the game Players can purchase more fruits and powerups in the game to go further and faster. The purchases can be made with accumulated points or with real cash. 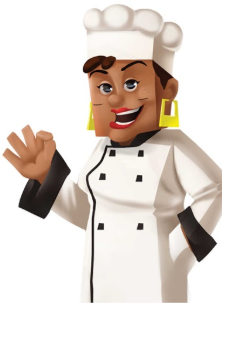 How Gamsole Started - QnA with the CEO


Dream Ville Gamsole has partnered with Diamond Bank for the launch of a gamified service aimed at educating and engaging the youth on financial services.

It’s a scenario many of us who live in or have visited Africa have experienced: being stopped by a traffic officer and asked for a bribe. Now, imagine playing a game on your mobile phone; instead of cruising through the streets of New York, you find yourself on an African street having to navigate that same familiar scenario to advance to the next level. Africa has many unique stories to tell. With the GSM Association predicting that 80 per cent of Sub-Saharan Africa will have access to mobile phones in the next five years, these stories are coming to life in the form of mobile gaming. As a result, the African mobile gaming industry is taking off and is a new, exciting space for investors to get involved. Telling uniquely African stories For any interesting game, the most important element is the storytelling. Through the story you can capture the player’s imagination and engage with them. So it makes sense to find the stories that are unique to the continent and to which African citizens can relate. And this goes further than the storyline itself, to encompass all the “arts” elements of a mobile game. An African game has its own style, from the graphics used, to the sound and music. It’s no surprise that this particular ‘African’ style goes hand in hand with increased uptake of home-grown mobile games across Africa. But what about making the leap across the ocean to reach global gamers? Crossing mobile gaming borders In the same way that Japanese video game company Nintendo has become the world’s largest video game company by revenue, there is no geographical limit to high-quality games. We’ve also seen how Nollywood movies have attracted an audience beyond Nigeria’s borders, despite their uniquely Nigerian storytelling. So, when it comes to creating games for a universal audience, you need to tell stories that are African, but are still relatable to a wider audience. Multiple platforms a useful step across the ocean With that essential foundation, it’s equally important to think about developing games across platforms to increase market and reach. If you confine yourself to one platform, you lose the audience using other platforms. This is a particularly important consideration given that different markets may favour alternative mobile platforms. By making your game available across the board, more people are likely to play it, thus increasing your revenue potential. The good news is that with modern technology, it’s easy to develop a game on one platform and port it across to other platforms. Gaining traction for your games The greater challenge is to develop games that people want to play, and market them effectively. The majority of users enjoy “casual” games like Candy Crush that are simple to play on their mobile phones, while a smaller segment of more serious gamers enjoy more complex games. When it comes to marketing, while digital marketing tools like Facebook and admob advertising are useful, they can be expensive for new developers. An effective alternative is to get your game featured on the mobile platform you’re operating on. Each platform has certain criteria in place to maintain the quality of apps featured, which means that when your game is featured users are likely to take notice. African gaming ripe for the picking With everything from compelling storylines and fun gameplays, to having universal platforms on which to develop and using these platforms to market across borders, the potential of African mobile gaming is enormous. The African mobile gaming market is also huge, and yet it hasn’t reached saturation point; it’s ripe for the investment picking. Simultaneously, the continent has made great leaps when it comes to connectivity through the telecoms. As a result, most African citizens now have some form of currency on their phones, which can be use to monetise mobile games and apps. This means mobile money cracks the monetisation puzzle within the gaming market. Not only does that make African mobile gaming an attractive area for local and international investors, but it is also a model that can be extended to solving payment issues on other forms of apps. Ready to take on the world There is no question that African mobile games can compete with their international counterparts, and by all accounts already are. What is key to maintain and develop this competitive edge is to be dedicated to creating high quality content that is relevant and compelling. By setting up this foundation now, the African gaming community both encourages future generations of local gamers, and contributes to the growth of the industry as a whole.